In the framework of the UNESCO-ENCATC project “Learning on intangible heritage: building teachers’ capacity for a sustainable future”, an extensive mapping of higher education programmes throughout Europe was carried out, identifying among those the programmes currently offering education on cultural heritage and ICH in all European countries, at undergraduate, graduate and postgraduate level.

The methodology employed for the mappig was a 3-step one:

A total of over 11,772 programmes were mapped in over 850 universities in 45 countries.

It must be highlighted that the mapping was conducted of those programmes for which there was information available in one of these ten languages: Catalan, Dutch, English, French, Galician, German, Greek, Italian, Spanish and Portuguese. However, the programmes might be taught in many different languages, namely the official languages in the 45 mapped countries. Language and other methodological issues (such as the difficulty to access some information online) certainly limit the scope of this research. While acknowledging these limitations, it can be argued that the data do provide a significant, first approach to a dataset of programmes involving ICH across all European countries. 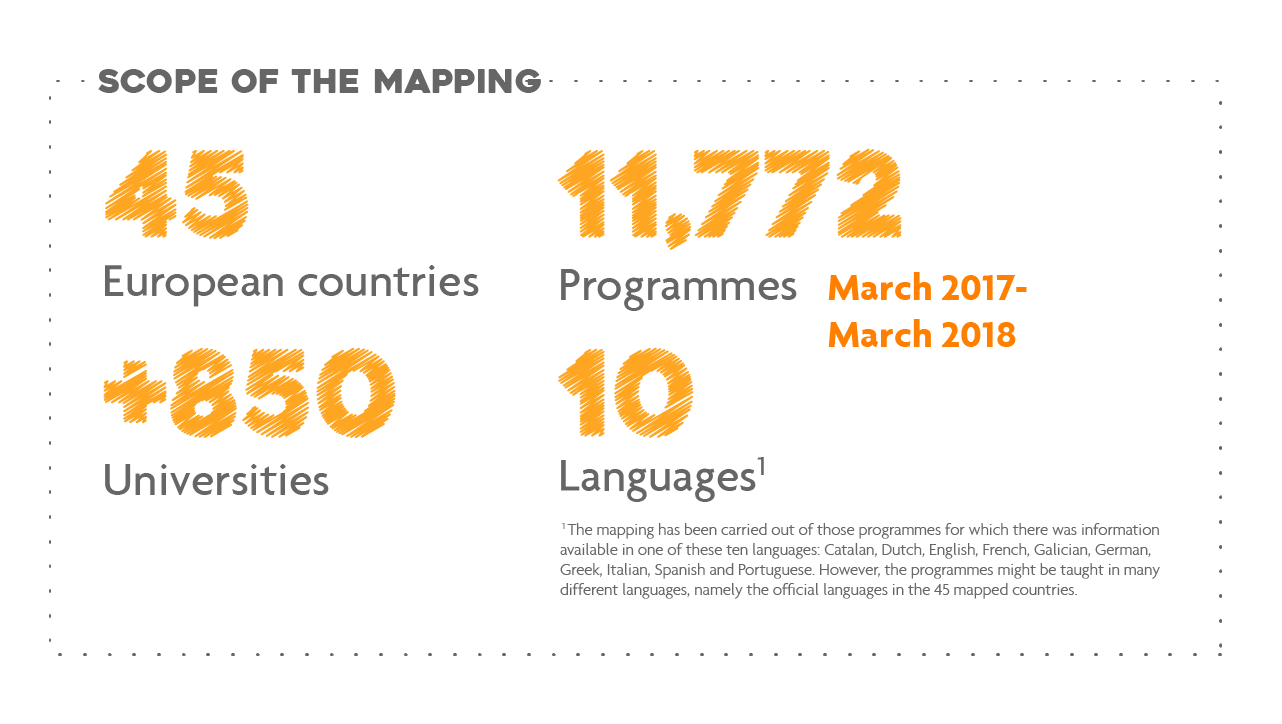 ICH programmes, subjects and content were mainly found across the following fields of study: museology, ethnology, tourism, archeology, history, art history, music, cultural management and language and literature studies, among others. This certainly remarks that ICH is an interdisciplinary object, and calls upon action for the development of higher education curricula in accordance to this interdisciplinarity.

The numbers of programmes involving ICH in one way or another – because they include one or more subjects on ICH or because they (possibly) deal with ICH in non ICH-specific modules – are considerably high. 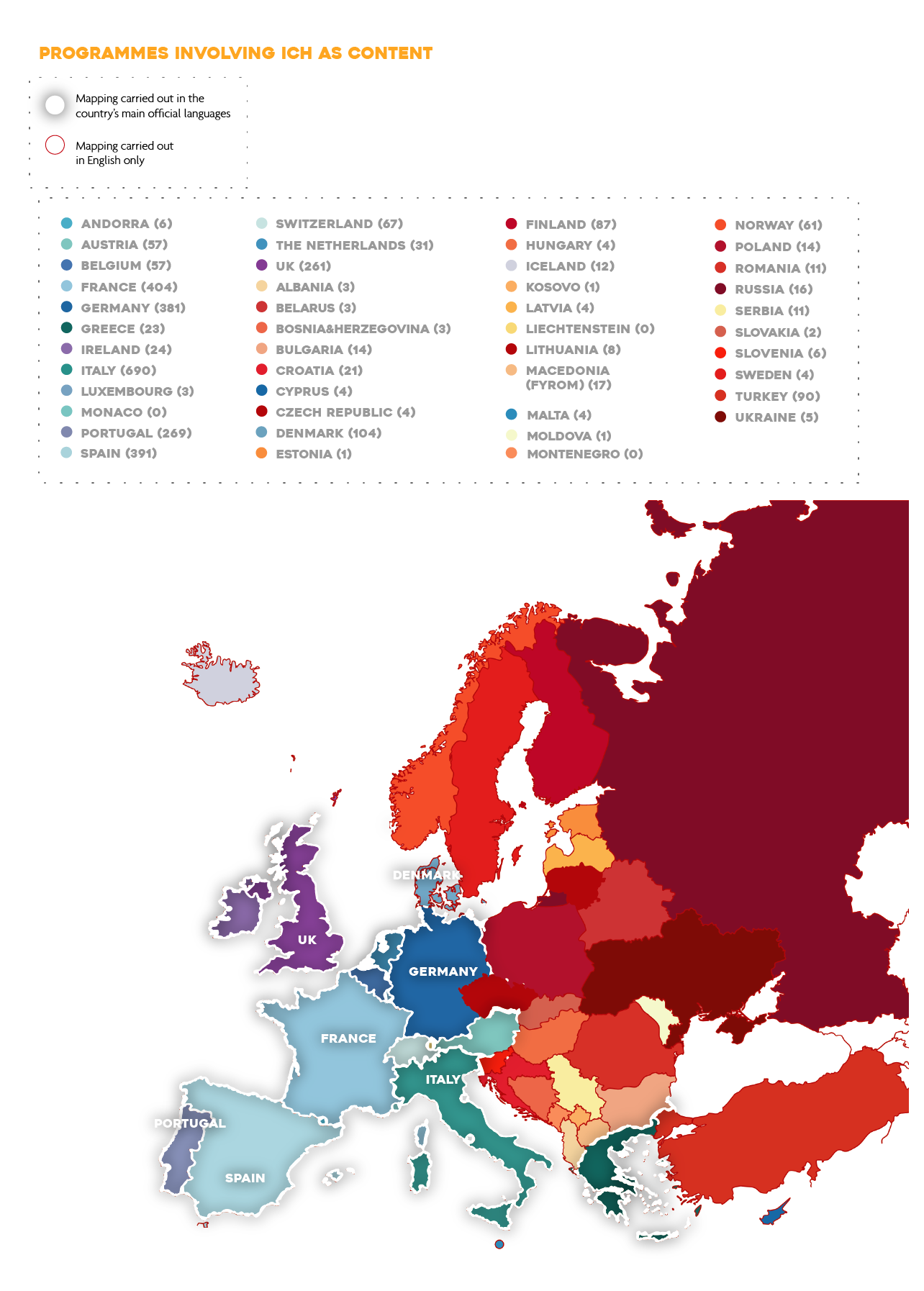 A total of 146 programmes at all levels have been found containing ICH subjects, meaning that those subjects or modules contain the term ICH or an equivalent – such as “Folklore”, significant for the case of Germany – in their title: 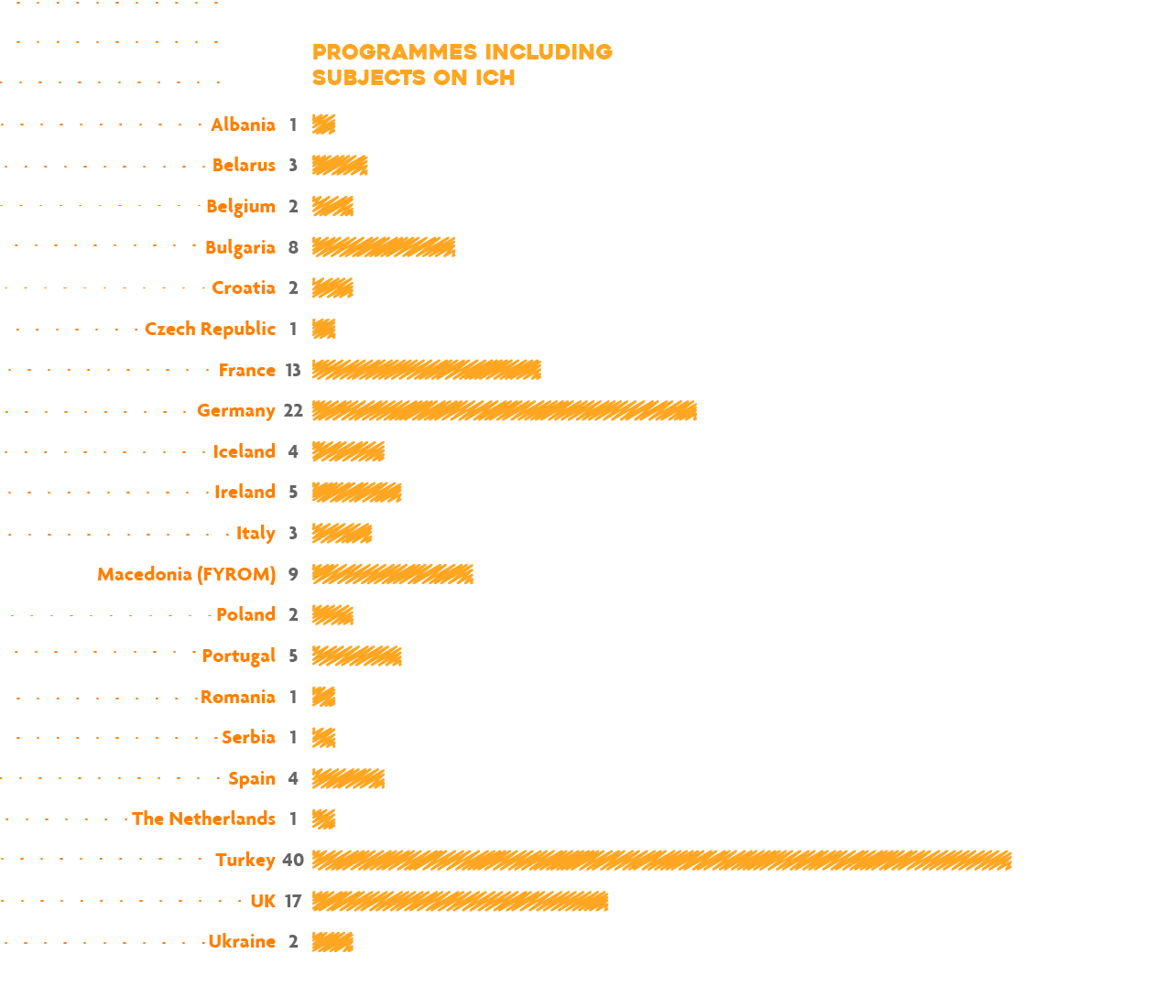 The following subjects or modules were found which specifically contain the term ICH in their title: 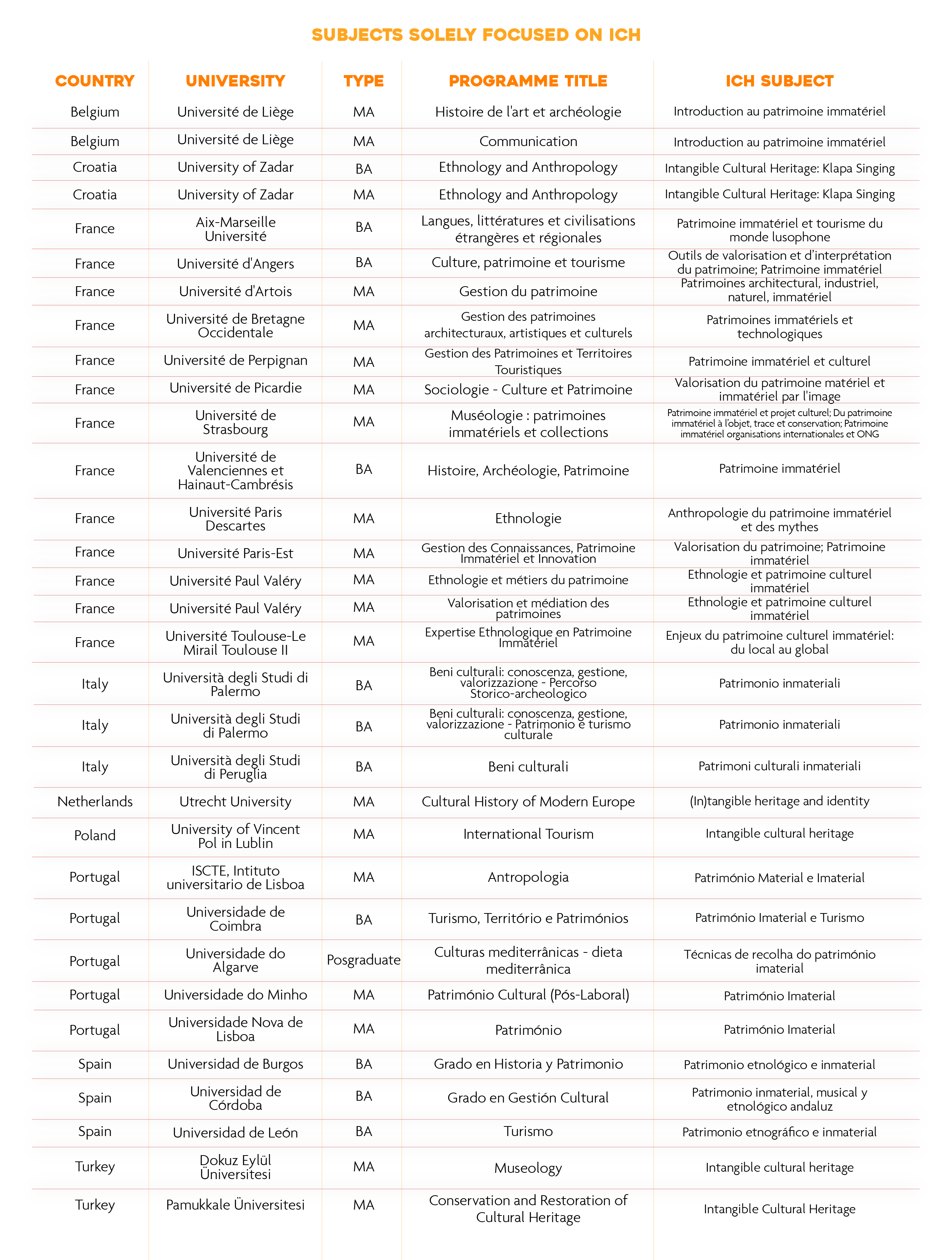 At the programme level, the following have been found which are specifically focused on ICH, and have the term ICH or an equivalent in their title: 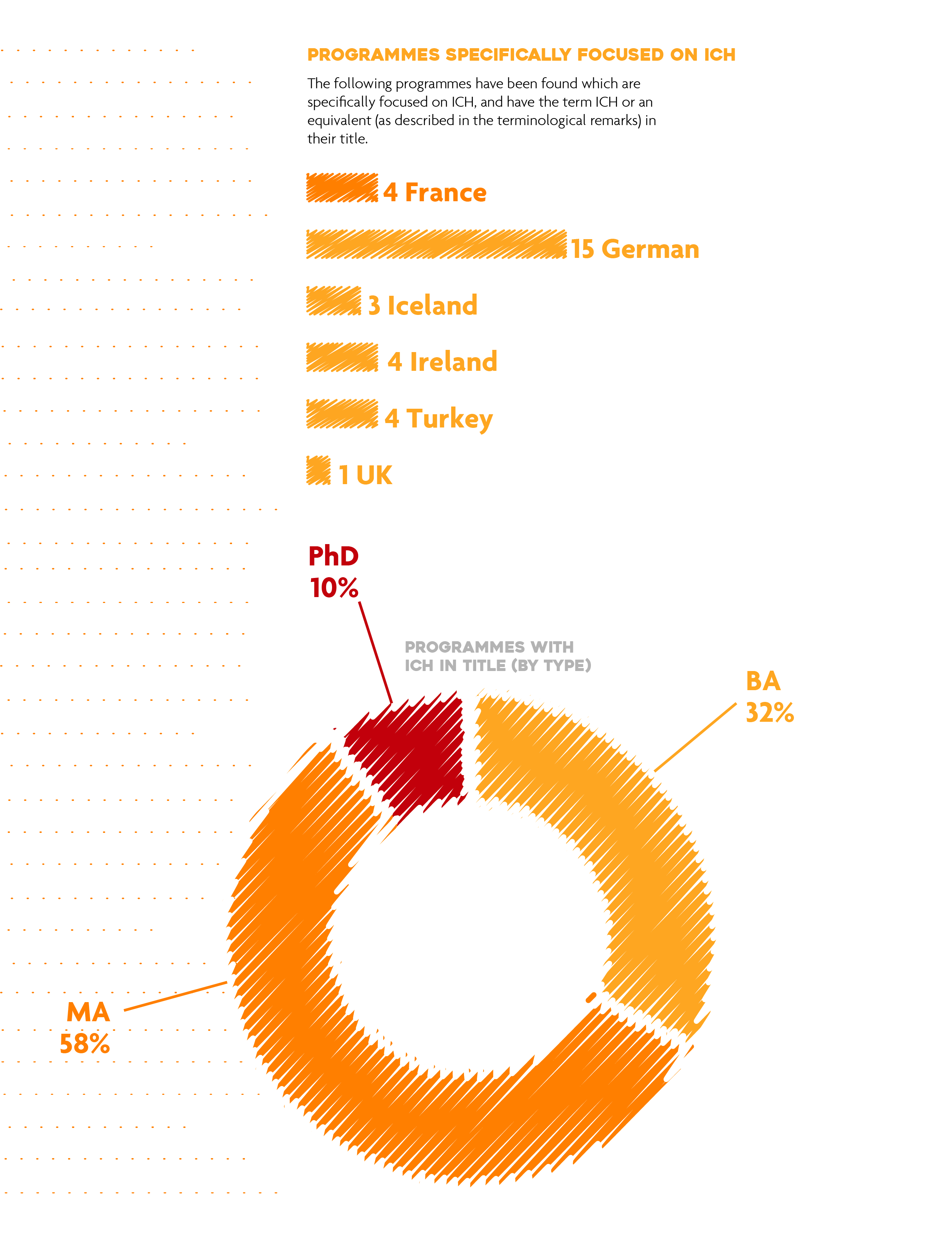 As shown by the preliminary analysis of the large dataset resulting from the mapping, the number of programs involving ICH in one way or another (having the term or a related one in the title, as a course or as content in non ICH-specific courses) is significantly high: 3,179 over the 11,772 programs analyzed in the 45 countries.

However, it was found that the term “ICH” is barely used in European higher education programmes, which suggests there is a décalage between what UNESCO is proposing since 2003 (followed by state governments) and its reflection in education programmes. French universities are the only ones, across the analyzed countries, using the term patrimoine immatériel in the titles of a few MA programs, four of them more precisely.

In general terms, it may be argued that, as shown by the UNESCO-ENCATC project in many different ways, while ICH is already integrated in some courses for students of heritage studies, there is a great need for strengthening this component in the teaching and curricula of universities focusing on other related topics, such as cultural management, cultural studies, arts management, or similar.

As an overall result of this project and its different outcomes, some recommendations are made for the further insertion of ICH in higher education curricula, which have to do with: sharing terminologies and rationales, envisaging the needs of the job market, sharing knowledge and practice, cross-disciplines polinization and influencing policies.

Established in 1992, ENCATC is a network of more than 100 member institutions and professionals in over 40 countries active in education, training and research within the broad field of cultural management and policy. ENCATC members have an impact on the education of thousands of cultural managers worldwide.

3Walks is an International Center for Cultural Research, Training and Knowledge and Social Transference which headquarters are in Bilbao, Spain, and with a branch in Brussels, Belgium. Leaded by professionals with a great experience on the academic field, research, training, international relations, project development and the meeting industry. They are focused on providing services to international non-profit organizations on leisure, culture, tourism and sports.