The basis of the work of Refuge Culture is to produce highly professional opera performances with renowned artists, orchestras and choirs. We work with professional as well as amateur artists who have come to Germany as refugees. Our performances take place in big concert halls, like Gasteig Munich, Theaterhaus Stuttgart, Radialsystem Berlin, and at renowned festivals like Lucerne Festival, Schlossfestspiele Ludwigsburg, Internationales Kirchenmusikfestival Schwäbisch Gmünd. Apart from the opera productions we have a lot of political performances and get invitations to perform and speak, for example for the German president, the UN Office in Geneva, the minister of Foreign Affairs, or at the Jewish museum. We also give workshops at schools, universities, refugee homes and do a lot of public relations work and social media work to foster peace and understanding. We were on big TV shows like ZDF Die Anstalt, Johannes B. Kerner and Marcus Lanz, which were seen by several million people, and Refuge Culture is said to be a part, if not one of the driving factors, of the German “welcome culture” movement. We actually managed for one of our artists, who had been already transported back to Afghanistan, to return to Germany due to a contract he got with Schauburg Theater in Munich where he is now the main character in Fassbinder’s famous and very up-to-date play Angst Essen Seele Auf.

According to the Australian Tania Canas, there is a thin line between mere presentation and real representation of a specific cause[1]. How do you respond to people who are sceptical concerning participatory projects and “accuse” you of using such projects and those involved for your own agenda and purposes?

Walaa said at a congress of psychologists where we gave a workshop: “I am so happy that I have relived my awful, terrible trip over the ocean in a peaceful environment on stage in Munich. After having played and sung Zaide I did not dream about it anymore – I found my peace”.

Hodda said when she received a WhatsApp in the middle of a rehearsal saying that her cousin was shot: “Now I want to sing, what else can I do? I will sing for her and for peace in my country!”

Rami listens to a Mozart symphony or divertimento every morning now. He wants to give CDs with Mozart to Pegida[2] and discuss with them. He believes that somebody who truly understands Mozart cannot start wars or be a racist.

For me these are the most valuable answers to this question.

I have the feeling that people who come from war and have lived in camps for years have a clear idea of what they want and what they do not want and can articulate this very well. They have a very fine barometer if somebody “uses” them or if they do not feel welcome or happy – then they just do not come again. They did not escape war to live in peace and freedom to be “used” in Germany in an opera project. What can I “use” them for anyway? To get money for my projects? I simply had no time to write a lot of applications for support because it was more important to write to UNHCR to help the refugees. I could have done much better sponsoring with projects not as big and crazy as these. There is no money to be made here, believe me. Use them for fame? I do not know if it is so great for my image and reputation to be known as the opera singer who works with refugees. I have never thought about this or even planned it; it just happened. I am very happy that people became interested in what we do and that I could reach out via the media to a broad and diverse audience.

I definitely believe that it is good if people go into a refugee camp with an open heart and want to make music or play basketball or give German classes. They open up for the other culture and for the people. Dialogue will develop, and even if there are misunderstandings, which is unavoidable, we are working together and getting to know each other instead of talking about “the refugees” or “the Germans” in an abstract way using clichés.

I talked with many psychologists, and there were always psychologists accompanying our projects. “Nobody goes on stage, if he or she does not want to”, they said. The project was always completely voluntary. Also, there was no monetary motivation.

Some raise the concern that the arts sector is only reacting to changing circumstances but lacks innovative power and vision. In your opinion, which role can/should arts and culture play in increasingly diverse societies?

L’art can be made for l’art. I sang a lot of concerts that were entertaining and beautiful. As for the projects I organize myself, I think that art should be a mirror of society. Opera should not be a dusty art form from the last century that is only of interest to an affluent and educated elite. I love opera to be in the middle of society. In our performances, you can find anyone from 4-year old kids to 85-year old grandmothers, illiterate persons or politicians, people voting from left to right. The art form opera usually reaches a certain, and unfortunately still relatively small, audience, and with the refugees we reach another audience who thinks maybe more politically/socially. It is great that the audience is so mixed and we try to create conversations within the audience, for instance by putting questions for the neighbours sitting next to you on the chairs in the auditorium before the performance starts. Theatres are organized very hierarchically, and many people in Germany do not find their way into them. I am convinced that projects like ours can help to reach out to more people.

During the last years there has been an increasing tendency to measure the social impact of arts and culture. Is that an issue for you and your organisation as well?

Yes. At the moment four bachelor students of the arts management program at Heilbronn University are working on a social impact study of Refuge Culture and I am very curious to learn about their findings and hope that I will be able to use the outcomes for further funding applications which will surely have to be written.

I personally have always asked myself why Germany paid my entire education to become a professional opera singer, and whether music can have an impact on others, or if I just studied music for selfish reasons. In the last three years, since I have been working with Zuflucht Kultur e. V., I have made my peace. I am very grateful for music, Mozart and for my voice. Music is a language beyond religion, culture and spoken language. With the emotions it transports, we can get in contact with and reach out to so many different people. We as artists can convey messages in a dramaturgy, emotion, melody, with lights, stage, dresses etc. so that people can identify and live with us and the stories we tell. We can touch people/lives/hearts. My task in this is to build bridges via art, to be an “intercultural birth helper/midwife”. I run around and work like a Shakespearian fool between foundations, refugee homes, school children, concert audiences, church choirs and politicians. Sometimes politicians ask me before I give a speech or presentation at a public event, “Can you tell this story” or “Maybe you can say this …”. I say, what I think and I feel as a human in interviews and as an artist on stage, and it is a great position. I do not have to be diplomatic. I am an artist.

You have met and worked with several arts managers and arts management students during the last years. What, in your opinion, is most essential for a profession in the arts sector and which skills and competencies would you like to see in arts managers?

An open and clear mind and heart. Curiosity for people and the arts! Sure, you have to organize a huge team and there is a lot to manage in arts organisations. But please, do not just calculate in money and people who come to performances. Be interested in art, go to the performances, listen and talk to the artists. Find out which performances create a dialogue in society and make political statements. Give artists the possibility to talk before or after the performance or in a workshop. Let them be ambassadors of their art and hold them responsible, not just to promote themselves, but also their art and the message they want to get across.

[2] Pegida stands for Patriotische Europäer gegen die Islamisierung des Abendlandes (“Patriotic Europeans Against the Islamisation of the West”) and is a right-wing German anti-Islam movement. 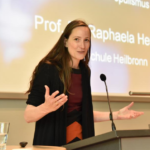 Raphaela Henze is a Professor of Arts Management at Heilbronn University and Co-Investigator of the Arts & Humanities Research Council funded, international and interdisciplinary network Brokering Intercultural Exchange (www.managingculture.net). Prior to joining Heilbronn University in 2010, she worked in several senior management positions in universities, ministries and foundations. Her main research focus is the impact of globalization and internationalization on arts management and arts management education. She teaches arts management, global culture, organizational and HR development in arts organizations to both undergraduate and graduate students and has just published the first German language book on international arts management entitled Einführung in das Internationale Kulturmanagement. The amended and updated English version of this seminal work will appear by the end of 2017 at Springer VS. Raphaela studied law at Humboldt-University Berlin and Paris x-Nanterre in France, she received her Ph.D. from Ruhr University Bochum, and was a postdoc researcher at both Yale Law School (USA)and the National Institute for Educational Policy Research (NIER) in Tokyo (Japan). She holds an MBA from the University of London.